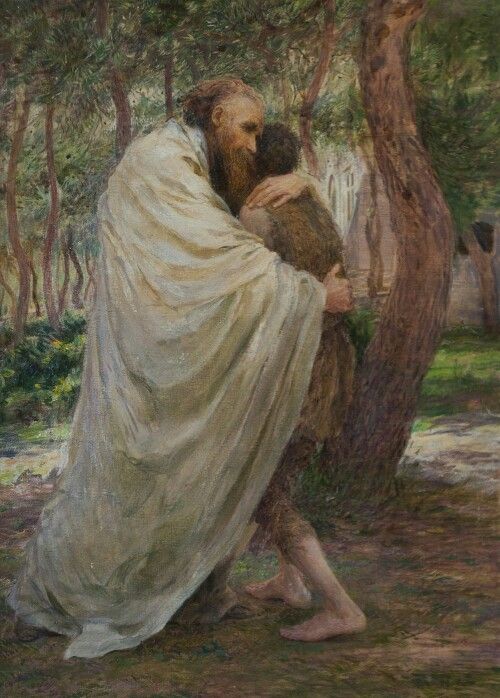 The Return of the Prodigal Son, art by Eugene Burnand

In George Herbert’s poem “The Pulley,” God pours out every blessing upon humankind—beauty, wisdom, honor and pleasure, holding back one gift—rest. For God thought to himself, “If I should…bestow this jewel also on my creature/He would adore my gifts instead of me/And rest in nature, not in the God of Nature.” God’s choice to withhold rest from humankind created restlessness and dissatisfaction in the human heart. God uses unrest as the pulley that draws human hearts out of the quicksand of worldly self-absorption back to God.

Yet let him keep the rest,
But keep them with repining restlessness:
Let him be rich and weary, that at least,
If goodness lead him not, yet weariness
May toss him to my breast.
(284)

This stanza contains two truths. The first is that the longing God has planted in our hearts makes us strangers on this earth. Malcolm Muggeridge considered the feeling of being a stranger in this world one of the greatest blessings that God had ever bestowed upon him. He wrote,

This sense of being a stranger, which first came to me at the very beginning of life, I have never quite lost, however engulfed I might be … in earthly pursuits… For me there has always been—and I count it the greatest of all blessings—a window never finally blackened out, a light never finally extinguished. I had a sense, sometimes enormously vivid, that I was a stranger in a strange land; a visitor, not a native, a displaced person. The feeling, I was surprised to find, gave me a great sense of satisfaction, almost of ecstasy. [When the feeling went away, I asked myself], would it ever return—the lostness? I strain my ears to hear it, like distant music; my eyes to see it, a very bright light very far away. Has it gone forever? And then, Ah! the relief. Like slipping away, from a sleeping embrace, silently shutting a door behind one, tiptoeing off in the grey light of dawn—a stranger again. The only ultimate disaster that can befall us, I have come to realize, is to feel ourselves to be at home here on earth. As long as we are aliens, we cannot forget our true homeland. (30-31)

Muggeridge can say, paradoxically, that he felt “connected” to his real self only when he felt a stranger in this world because his longing for a place beyond this world was an experience of his true homeland—heaven.

“If goodness lead him not, yet weariness may toss him to my breast.” The second truth that Herbert’s poem contains is that God loves us so much that he welcomes his prodigal children back home for any reason whatsoever. God does not demand that our motives be either noble or pure as a prerequisite for being accepted home.
The prodigal son came home because he was hungry and tired. It made no difference to his father why he came home, as long as he had him home safe and sound. But like the prodigal son, our guilt makes us feel that we no longer even deserve to be called God’s children.

Our guilt distorts the merciful countenance of God. Julian of Norwich tells us that when we are submerged in our guilt “We believe that God may be angry with us because of our sins.” In consequence, we project our guilt on God as anger and then fear punishment. But when cleansed of our guilt we see clearly. Julian writes, “And then our courteous Lord shows himself to the soul, happily and with the gladdest countenance, welcoming it as a friend, as if it had been in pain and in prison saying, ‘My dear darling, I am glad you have come to me in all your woe. I have always been with you’ and now you see me loving, and we are made one in bliss” (246).

The restless longing that God has planted in our hearts is more than our desire for heaven. It is God’s loving invitation for us to return home.